Development of Secondary Osteoporosis in Teenage Girls with Menstrual Disorders


Introduction: Nowadays, the most common problem in teenage girls is them facing menstrual disorders that develop secondary osteoporosis in their adolescent period. The locomotor system disorder is noticed more often in girls with adolescence hormone pathology, than in the population. This has an enormous human and socio-economic impact. Osteoporosis is estimated to affect 200 million women worldwide.

Objective: The aim of this research is to determine the development of secondary osteoporosis in girls during their adolescent period.

Materials and Methods: An analysis of 173 girls aged from 13 to 17 were under our supervision in the children’s clinic sanatorium “Zdravnisa”. Girls were divided into four groups according to their menstrual disorders.

Results: As per the correlation analysis data, the influence of steroid hormones level on bone content has a cumulative effect on girls.

Conclusions: For patients with oligomenorrhea, secondary amenorrhea, and polymenorrhea, there were disordered correlations of gonadotropic hormones. Correlations between calcium, phosphorus, and magnesium are disordered, which can be proof of mineralization processes disorder. As per the correlation analysis data for the girls with adolescence pathology, there were revealed direct average correlation connections between the concentration of steroid hormones and structural-functional properties of bony tissue. Low concentration of progesterone in the blood of girls with adolescence pathology is one of the main reasons for bone content deficit, development of osteoporosis, and scoliosis progression. 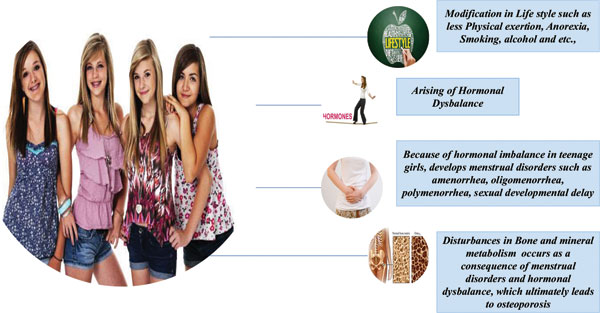