Effects of Motivational Interview on Awareness, Attitude, and Practice of Breast Self-examination in High-risk Women: A Clinical Trial Study


Background: Breast cancer is the most commonly diagnosed malignancy and the leading cause of death among women throughout the world. The incidence of breast cancer has been increasing in Iran and the disease has been the most prevalently registered cancer in the country during the past decade.

Objective: Therefore, this study aimed to investigate the effects of motivational interviewing (MI) on awareness, attitude, and practice of breast self-examination (BSE) in high-risk women.

Methods: This randomized clinical trial recruited 60 rural women at higher risk of breast cancer in Babol, Iran in 2016. Thirty women from two randomly selected villages were assigned to the MI group. Two other villages were also randomly selected and 30 of their female residents were allocated to the control group. Eligible people were first identified by referring to the villages’ health centers. The participants were recruited using a table of random numbers and their informed consent was obtained. In the MI group, five 90-minutes weekly sessions of MI were held. Conventional training was conducted in the control group. All subjects completed a researcher-made questionnaire at baseline (before the intervention), at the end of the study, and three months later. Data were analyzed using repeated measures analysis of variance, and Bonferroni, Friedman, Wilcoxon, and chi-square tests.

Results: In the MI group, there were significant increases in women's mean scores of awareness in the first and second follow-ups compared to the baseline. Moreover, the mean score of attitude toward BSE in the MI group increased at the end of the study (P<0.001). The positive performance of the participants was significantly different between the MI and control groups at the end of the study (86.7% vs. 16.7%; P<0.001) and three months later (83.3% vs. 13.3%; P<0.001).

Conclusion: MI can be used alongside conventional trainings to promote and motivate screening behaviors. 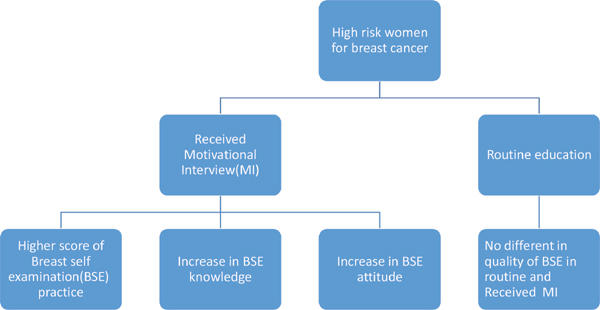