Does Physician Gender Impact the Clinical Productivity and Salaries of Obstetrician-Gynecologists?


Background: Male medical student interest in the field of obstetrics-gynecology has significantly decreased in the last three decades. A perceived patient preference for female obstetrician- gynecologists (Ob-Gyn) and subsequent gender differences in clinical productivity and compensation may influence this trend.

Results: On average, male providers earned a numerically higher salary in each year studied, but when the entire timeframe was evaluated, there was no significant difference in salary nor total productivity between women and men (p=0.19 and 0.15, respectively). There was a gender difference in how total productivity was achieved, with women seeing twice as many new patients (p= 0.0025), and men achieving higher average wRVUs per patient encounter (p=0.02).

Conclusions: There was no significant difference in total productivity and there was no significant difference in salaries between male and female Ob-Gyns. However, there were differences in the type of care that contributed to productivity by gender. Female providers saw a higher proportion of new patient encounters, while male providers accrued a higher wRVU per encounter, likely as a result of higher procedure volumes. These findings are an encouraging sign that men are not disadvantaged in terms of productivity in obstetrics-gynecology and that compensation models such as the one in this system can promote fair payment in mixed-gender physician groups. 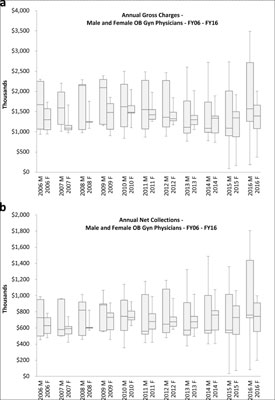